The author of Wild Horses, Susan Serafin Jess, will discuss her research of a real-life murder mystery in Battle Creek, Michigan that provides insight into her findings of the unjust treatment of the LGBTQ community in our criminal justice system.

with Rola Nashef (Director of Film)

Detroit Unleaded holds its place in American cinema history as the very first Arab-American romantic comedy portraying second generation Arab characters specific to Detroit and Dearborn. A slice-of- life Romantic Comedy that centers around an Arab-owned 24-hour gas station in Detroit, the film premiered at the Toronto International Film Festival (2012) where it won the Discovery Award. The New York Times says that in Detroit Unleaded Rola Nashef “has created a surprisingly affecting examination of one aspect of the Arab-American experience: the dissonance between American hookup culture and home-country traditions.”  Rola Nashef will discuss her extensive experience in the arts and involvement in Detroit’s diverse communities as a catalyst for creative expression and storytelling.

Unfortunately because of copyright permissions, we cannot show the movie here. However, if you are LCC faculty, students, or staff, you can view the movie through the LCC Library’s “Films on Demand” resource.

How pirate radio stations and their DJs transformed the UK’s black music industry.

Biography of the Presenter: 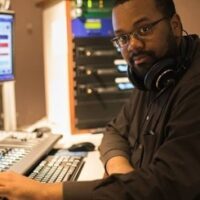 Roosevelt Belton Jr. has close to ten years’ experience on FM radio in the Metro-Detroit area. He hosts his weekly program, The Friday NightGroove, on 88.3 WXOU FM and has served as an associate producer for 101.9 WDET FM. He’s a two-time graduate of Oakland University, with a Bachelor’s in Psychology (2013) and a Master’s Degree in Communication (2015).